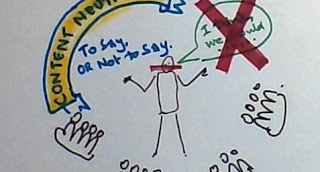 When I first encountered the words ‘content neutrality’ in facilitation, my first thought was that probably it was one more new word from the stables of IPR-fixated West that comes up with new coined words just so that some author’s IPR on a particular term/word/usage isn’t infringed.
Deep-dive on the practice of facilitation brought about a much higher awareness of the importance and understanding of content-neutrality and how especially for a culture that is steeped in hierarchy, it was or is so difficult.
As a culture we have an opinion on one and many things. And as a Speaker, Teacher, Trainer we have wonderful ‘pedestal’ opinion. So the day we stand on a pedestal of elephant knowledge in front of others who do not have that knowledge, we love to ‘download’ our opinion on the meek ants. And probably that’s a high!

Why is it so difficult?
Maybe because it starts very young. Since childhood (maybe since infancy), we have had people elder to us give us ‘gyan’ on what is to be done and what is not to be done. I am not saying that the gyan is not valid and shouldn’t be given, however if you typically look at the school teaching environment, when are we as pupils even asked for an opinion?
Teachers do ask Questions, however all answers need to be as per syllabus. If one treads the path of NIS (Not in Syllabus), all hell breaks loose!
Now surprisingly, many of us who call ourselves facilitators also fall into the trap of giving gyan and still have the audacity to call ourselves facilitators.
A process facilitator has to be aware that they have to keep their wisdom to themselves.

Belief in the wisdom of the group; belief that amongst the group lies the answer; belief that if the right ‘safe environment’ is created and an appropriate process used, the wisdom and knowledge will emerge.

And if the facilitator ultimately still wants to share their wisdom (and that too should be in rare cases) should let the group know that they are shifting from the facilitators role to the one who wants to make an opinion!

So behaviourally, what could Content-Neutrality mean?
A list which I have heard, sensed along my journey as a CPF (Certified Professional Facilitator)
·        Process Clarity – Rather than using a favourite facilitation process you have an affiliation to, a facilitator needs to have a repertoire of process methods and then using the right method to emerge group wisdom is the clincher.
·        Divergence and Convergence – Based on the Desired Outcome, plan which Divergence and Convergence methods would being about a higher sharing and group learning that would support the groups journey forward.
·        Avoid Leading – questions, examples, analogies and even metaphors navigate in the listeners mind a way of thought and that may lead the group to only think in a particular direction.
·        Physical Position – If one is facilitating say groups in conflict or people having strong opposing opinions, then standing in the centre is very important. If the groups feels that you are leaning to a particular side, they may sense that you are supporting that particular group/side/person.
·        Listening (Mindful and not Active) – Usually Trainers have a practise of listening into small group conversations and unknowingly saying something that creates a leading way to the group think. So surprise, surprise!, avoid listening to what the small group/s is discussing. You move around, however listen to whether the process is being followed, sense if there are dominators are over-talking and if they are, a quick change of process in that small group for e.g. round-robin speaking -1 min for each person etc. can be introduced.
·        Responses – In training, we are used to respond to learner contribution by saying “Great point”, “Superb”, “Interesting” and such other encouraging words especially when we hear a learner say something that we wanted to hear. This unknowingly makes someone who had made or makes a point and then doesn’t get the same verbal affirmation from the trainer, feel that their points were not as good.  A content-neutral facilitator should respond similarly to every point, for example, “Um-hmm, anyone else?” or “Fine” to every point.
·        Facial expressions – My CPF Assessors gave me feedback, that my face is expressive and when I hear what I like - I tend to have a bring a happy face to my listening and on the other side, my facial expressions can be irritating when I hear something that I don’t like. And this could be a bias that affects the tenets of content-neutrality

Theatre in Training by Ajit Kamath on Sun, 29 May

May 22, 2011
Dear Friends,We would like to personally invite you all for the Trainers Forum Meet at Mumbai, on Sunday, 29th May, 2011.Session I –The objective of the session is to understand how Dramatics and Theater techniques are powerful mediums to make a Trainer communicate learning concepts to his participants powerfully. Theater uses all the 3 elements i.e. visual, auditory and kinesthetic
Session includes:IntroductionVarious Theatre Techniques useful in TrainingRole Plays (commonly used)
‘Improv’ (Improvisation) Forum Theatre – Trainer as a Role PlayerForum Theatre – Trainer as a Role Player and Action/Reaction as per the audienceForum Theatre – Professional Actors as Role PlayersSkills PracticeFacilitator:Mr. Ajit Kamath, Director, WizTalks. Ajit started lecturingin 1992, and has been in the space of Soft Skills Training since 1996. Since 2002 he started Training for Corporates' on topics such as Presentation Skills, Communication Skills, Team Building & Leadership. He…
Post a Comment
Read more

Dealing with late-comers in workshops

March 03, 2014
One of the challenges every Facilitator / Trainer has to deal with is the learners coming in late.
My advise: If more than half of the expected learner group are in the room, I kick-off my program.
When the late-comers arrive, I acknowledge them with 'eye contact' - at times integrate them with a quick recap of what I have covered.

If less than half are in the room, then I ask the sponsor (HR / Business) what should be done? - most of them advice a wait of at least 15 mins. We then announce this to those present - so that they can have coffee or maybe catch up on a call or two.  In the meantime the sponsor starts calling/texting the no-shows to find out what is happening. After the extended time lapses, we just start.
I won't be harsh with penalty because in most of the India cities, traffic can be unpredictable.

In certain regions of India (where late-coming is seen as okay), I would start with a fun/intro/ice-breaker activity which takes about 15 to 20 mins. - this engage…
Post a Comment
Read more

December 12, 2017
We have for ever lived in hierarchy. We had Rajwadas, and Raja’s and Rani’s! And then the Maha Mantri, the Mantri’s and the Peshwa’s. We lived in Hierarchy. Then came the Queen from land-afar and this took the whole hierarchical bit 100 notches higher.
And then in spite of democracy for the about last 70 years, we still are deep-rooted in hierarchy.  Organisations are legal entities and yet we have similar hierarchical structures that define many aspects in an organisation from decision-making, office-cabins, cafeterias (esp. in manufacturing) and where one is allowed to Park etc. In some places even the Washrooms are hierarchical rules of entry.
Funnily, many curse these discriminations however the same people aspire promotions not for the challenge of the enhanced deliverables or for the sense of leading people, but mostly for the ‘power’ that they would enjoy in those positions.
However, as Bob Dylan professed in the 60’s in his song The Times They Are A-Changin'  especially the…
Post a Comment
Read more