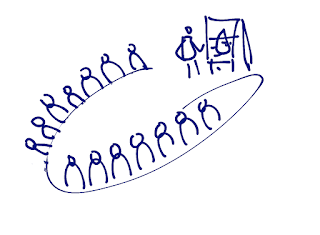 Transforming from a meeting Leader to an 'Innovating Facilitator'

A 2nd line Leader from a Technology company makes a subtle confession in the ‘Fostering Innovation’ workshop that I am facilitating, by putting up a Question, “What if, my team members don’t just come up with ideas! Am I then not supposed to lead innovation with my own ideas?”
And my reflective googly to him was “So, what’s the enabling environment like in your meetings… are meetings being LEAD or are they FACILITATED?
And therein lies the ‘tale’ of South-Asian Leaders or should I rather call it complete ‘story volumes’. (I’m sure it happens in other regions too however as my range of work primarily is in South Asia, so my context is more here).

And what gets missed out is the ‘ignition’ aka the start point of an innovation environment…. Meetings!

And the reflective question is, “How many of us in Leader positions really facilitateinnovation meetings?” The default drive is to “lead it”.

So how does a Leader become an Innovation Facilitator for enabling Innovation in teams and organisation?

The 13 commandments to Innovating Facilitatively:

January 07, 2018
(This is the text version of my article that appeared in the magazine Human Capital January 2018 issue Vol.21 No. 8) Usually Managerial responses to any proposition ranges from a direct “No” to “NO, but” and then “Yes, but” to a direct “Yes.”. The magic of “Yes,…. And” is acceptance, and then acts as a building brick, a movement forward to the original idea. Improv is a short form of the noun improvisation . And Improv! can happen anywhere and everywhere! Anyone who has viewed the UK fav show “Whose Line is It Anyway” would know the speed in which the actors improvise on the show builds a hilarious, fun-filled banter. Improvisation has been used as a Drama tool for many years and it can train an artist to agility & in-the-moment thinking especially when a co-artiste forgets a dialogue or goes wrong on a particular action. I have used this tool to train Public Speakers especially
Post a Comment
Read more

December 12, 2017
We have for ever lived in hierarchy. We had Rajwadas, and Raja’s and Rani’s! And then the Maha Mantri, the Mantri’s and the Peshwa’s. We lived in Hierarchy. Then came the Queen from land-afar and this took the whole hierarchical bit 100 notches higher. And then in spite of democracy for the about last 70 years, we still are deep-rooted in hierarchy.  Organisations are legal entities and yet we have similar hierarchical structures that define many aspects in an organisation from decision-making, office-cabins, cafeterias (esp. in manufacturing) and where one is allowed to Park etc. In some places even the Washrooms are hierarchical rules of entry. Funnily, many curse these discriminations however the same people aspire promotions not for the challenge of the enhanced deliverables or for the sense of leading people, but mostly for the ‘power’ that they would enjoy in those positions. However, as Bob Dylan professed in the 60’s in his song The Times They Are A-Changin'
Post a Comment
Read more