Improv is a short form of the noun improvisation. And Improv! can happen anywhere and everywhere! Anyone who has viewed the UK fav show “Whose Line is It Anyway” would know the speed in which the actors improvise on the show builds a hilarious, fun-filled banter.

Improvisation has been used as a Drama tool for many years and it can train an artist to agility & in-the-moment thinking especially when a co-artiste forgets a dialogue or goes wrong on a particular action.

I have used this tool to train Public Speakers especially the ones with stage fright as this tool immensely helps if one goes “blank” in front of an audience - improvise and come out of mind-freeze!

In colleges, there have been enough competitions around improvising on-the-spot or what is called as impromptu.

So, the quest of some of us who see Drama as a Life Skill has been to bring this powerful Drama Tool to the space of Adult Learning and Application in organisational settings. This quest is what we would call Applied Improv

Improv in Organisations
Primarily people think that it can be used for Fun @ Workplace and relegate it to the space of fun, frolic and games, thus making a powerful tool that can build Collaboration, Agility and Creativity lie unnoticed in the side-lines.

The way I see it, Improv can be a magical wand in the space of building a culture of Collaboration in the workplace. How? This is what this article is about.

2 Tools of Improv that can build culture of Collaboration in organisations
1.       Yes…And – One of the foundational tools of Improv, ‘Yes…And’ is built on the ‘Accept and Build’ concept.
As my friend Paul Jackson writes in his book ‘Easy – Your Life pass to Creativity and Confidence – “Accepting is not the same as agreeing. Accepting is hearing what’s on offer and taking account of it as part of ‘Here’ and ‘Now’.
Usually Managerial responses to any offer/suggestion/proposition/ideation ranges from a direct “No” to “No, but” and then “Yes, but” to a direct “Yes”. The magic of “Yes…And” is acceptance and then acts as a building brick, a movement forward to the original idea.

More often than not, with years of experience, knowledge and positional power, many Managers are in a habit of not listening to the team and reactively have a “No” when they are into a one-to-one communication. In group environments, they are a bit nicer and say a “Yes” along with a thorn of the word “But” in their communication. So when the Manager says, “Yes…But” the impact on the team is that of a No. The Manager feels good that he/she did use an encouraging “Yes” however they forget the flip-flop impact with the “But” that was added later. 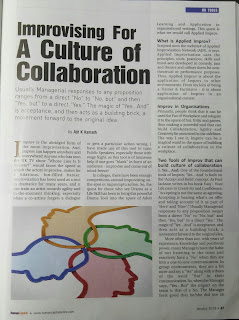 Gerald and Henry authors of ‘How to Read a Person like a Book’, say, “But” is a verbal eraser. Nothing that comes before it counts.

On the other hand, let’s say Managers and teams were encouraged to use, “Yes… And” whenever they hear an idea/suggestion/thought, what could happen?

Example 1
Team-member: “I think we should use an app for people signing in on the attendance”

If you look at the examples above, a direct Yes or No has its consequences. A “No” can perceptively look as insubordination and putting a “Yes” can make ones reality go under-cover and thus disengage team-members.
The “Yes… But” is as good as the impact of saying “No”!

And, the magical “Yes… And” keeps the conversation moving ahead. Reading this may look conceptual and just-another-gimmick and my offer to the readers is to –GO DO IT. When one uses the “Yes…And” in conversations the magic unfolds – let’s look at how it works out in groups or meetings or in decision making.

Using “Yes, but…” in groups
“Let’s have a meeting next week”
“Yes, but … next week has many holidays”
“Yes, but … we could decide on meeting on Monday”
“Yes, but … Monday is usually so drag”
“Yes, but … then let’s look at the meeting on Tues”
“Yes, but … Tuesday’s have a lot of traffic around here”
“Yes, but … let’s meet some other week”.
If you can sense the energy, the group’s energy at this point of time would be deflated. 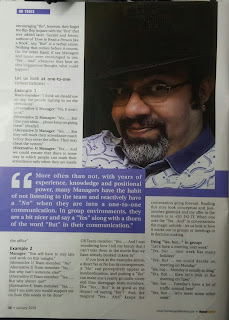 The energy of the group would be much higher for the meeting.

In the words of Kat Koppet in her book “Training to Imagine”, she scripts “Yes, And” is both an incredible simple and deeply profound tool for solving problems, building relationships, and creating new products. Organisations have embraced the concept more directly and enthusiastically than any other improv approach”

As a Manager, think of how you can use a “Yes,… and” to one of your new members proposing an idea that was tried in the organisation a few years ago and the pilot had flopped. So would you say “No”, “No, But”, “Yes, But” or do you have the courage to accept and build by using a “Yes, And” and encourage your team to keep on ideating forward!

2.    Word Story
Meetings could start with an engaging Improv activity, that’s known as one/two-word story. Devote the first 5 minutes of every meeting in running this energizer.

How does one do it – The first member starts with 2 words, the next person (in the round-robin style) adds 2 words more and then the next person adds another 2 and so on. The words added thus should form into a grammatical sentence. When the sentence comes to a natural close the person can say full-stop. At times, one may add a Question mark or an exclamation mark. Sometimes people who do not want to end the sentence add an “and” rather than a stop. Commas aren’t allowed as part of the sentences.

Then the next person starts a new sentence that is connected to the previous sentence/s. Thus keep it ongoing till a story starts emerging. The faster the speed this exercise gathers, the greater is the acceptance and moving forward that happens. A few grammatical mistakes are fine as the group picks up speed in building the sentence.

Unknowingly what happens in the group is - acceptance and moving forward – precisely what a culture of collaboration requires. To accept what the earlier person has offered requires one to trust whatever the person brings up!

One can vary this exercise by making it one-word story or a sentence story.

If you look at the example above, one never knows how the sentences will be made – it depends on the next person who uses a set of certain words the way it emerges for them and interesting the trajectory of the whole sentence moves on its own course.

There are many such Improv tools that can be introduced once the above 2 are brought into practice. It may look childish and (no ‘but’) yet there lies a child in all of us who always was the most collaborative.  Isn’t it?

Now, the question is “Do you want to Improv?” 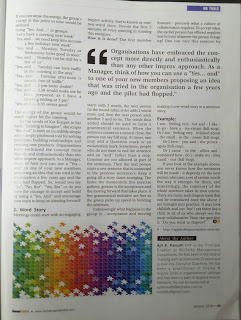 About the Author:
Ajit K. Kamath CPF, is the Principal Enabler at WizTalks Management Consultants. He has been in the field of Training and Facilitation for 23 years, and now into Executive Coaching. He is one of the Founders of the India Chapter of  International Association of Facilitators  He has also been a practitioner of Drama & Improv Tools in organisational settings and has been a part of Applied Improv Network. He can be contacted on ajitkamath@wiztalks.com or on wiztalks@gmail.com.

December 12, 2017
We have for ever lived in hierarchy. We had Rajwadas, and Raja’s and Rani’s! And then the Maha Mantri, the Mantri’s and the Peshwa’s. We lived in Hierarchy. Then came the Queen from land-afar and this took the whole hierarchical bit 100 notches higher. And then in spite of democracy for the about last 70 years, we still are deep-rooted in hierarchy.  Organisations are legal entities and yet we have similar hierarchical structures that define many aspects in an organisation from decision-making, office-cabins, cafeterias (esp. in manufacturing) and where one is allowed to Park etc. In some places even the Washrooms are hierarchical rules of entry. Funnily, many curse these discriminations however the same people aspire promotions not for the challenge of the enhanced deliverables or for the sense of leading people, but mostly for the ‘power’ that they would enjoy in those positions. However, as Bob Dylan professed in the 60’s in his song The Times They Are A-Changin'
Post a Comment
Read more

December 12, 2017
Transforming from a meeting Leader to an 'Innovating Facilitator' A 2nd line Leader from a Technology company makes a subtle confession in the ‘ Fostering Innovation’  workshop that I am facilitating, by putting up a Question, “What if, my team members don’t just come up with ideas! Am I then not supposed to lead innovation with my own ideas?” And my reflective googly to him was “So, what’s the enabling environment like in your meetings… are meetings being LEAD or are they FACILITATED? And therein lies the ‘ tale’  of South-Asian Leaders or should I rather call it complete ‘ story volumes ’. (I’m sure it happens in other regions too however as my range of work primarily is in South Asia, so my context is more here). And what gets missed out is the ‘ignition’ aka the start point of an innovation environment…. Meetings! And the reflective question is, “How many of us in Leader positions really  facilitate innovation meetings?” The default drive is to “lead it”. S
Post a Comment
Read more